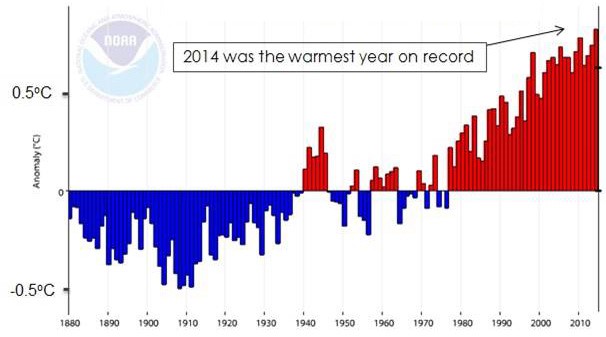 This bar graph above is from the United States’ National Oceanic and Atmospheric Administration. It depicts global land and ocean temperature anomalies between 1880 and 2014, relative to the 20th century average. Whereas temperatures were colder than average between 1880 and 1940, they have been warmer than average since the late 1970s. This trend illustrates that global temperature has been increasing over the 20th century. The graph shows that 2014 is the warmest year on record, with temperatures at 0.74 degrees Celsius (°C) above average. The coldest years on record are in the early 1900s, with temperatures around 0.49°C below average. (Image and text from http://ec.gc.ca/sc-cs/Default.asp?lang=En&n=A5F83C26-1) 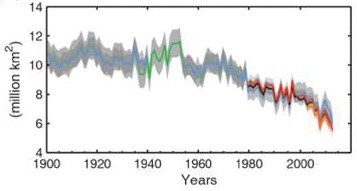 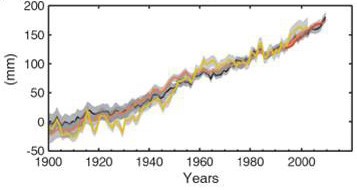 There are two graphs from the Intergovernmental Panel on Climate Change’s (IPCC) Fifth Assessment Report (AR5) that show observed indicators of a changing climate. The first graph (left) shows the Arctic summer sea ice extent (measured in million square kilometers (km2)) from 1900 to present. This graph shows that amounts of ice have diminished over time, with extent ranging from over 10 million km2 in 1990 to around 6 million km2 in recent years. The second graph (right) shows global average sea level (measured in millimetres (mm)) from 1900 to present. It illustrates that the global mean sea level has risen about 20 centimeters (cm) since 1900.