A greenhouse is used to create a warmer growing environment for plants that would otherwise not survive in the colder conditions outdoors. In a greenhouse, energy from the sun passes through the glass as rays of light. This energy is absorbed by the plants, soil and other objects in the greenhouse. Much of this absorbed energy is converted to heat, which warms the greenhouse. The glass helps keep the greenhouse warm, by preventing the warmed air from escaping. 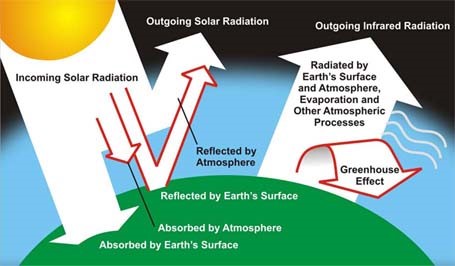 In creating warmer conditions on Earth than would otherwise exist, the Earth's atmosphere acts similarly to the glass in a greenhouse. About 31% of the incoming radiation from the sun is reflected directly back to space by the Earth's atmosphere and surface (particularly by snow and ice), and another 20% is absorbed by the atmosphere. The rest of the incoming radiation is absorbed by the Earth's oceans and land, where it is converted into heat, warming the surface of the Earth and the air above it. Some of the heat energy - infrared radiation - is radiated back into space, but some of it is kept in by our atmosphere. Particular gases in the atmosphere act like the glass in a greenhouse - they insulate the Earth by preventing the heat from escaping. These 'greenhouse gases' absorb heat and radiate some of it back to the Earth's surface, causing surface temperatures to be higher than they would otherwise be.

Without this natural greenhouse effect, the Earth would be much colder than it is now - about 33°C colder - making the average temperature on the planet a freezing -18°C rather than the balmy +15°C it is. The warmth of our climate is crucial because on Earth and in the atmosphere, water can exist in all three of its phases - frozen as snow or ice, liquid as water, and gaseous as water vapor. The cycling of water from one phase to another is critical to sustaining life since it is this cycling of water through the land-ocean-atmosphere system that replenishes the water available to life on Earth. The water cycle is also an important part of what drives our weather and the climate system generally. (http://ec.gc.ca/sc-cs/default.asp?lang=En&n=863DE3DE-1)

Human activity has also changed the composition of the atmosphere. People have, for a long time, burned biomass (wood and combustible agricultural products and by-products) for heating and cooking. However, during the last 150 years or so - our 'Industrial Era' - the combustion of fossil fuels (such as oil, natural gas and coal) has become central to many economic activities. The resulting increase in greenhouse gas concentrations has affected the climate system. The combustion of biomass and fossil fuels releases carbon dioxide to the atmosphere, increasing the atmospheric concentration of this greenhouse gas. These and other human activities are also causing increases in the atmospheric concentration of other greenhouse gases, such as methane and nitrous oxide. The consequence is that we have increased the insulating properties of the atmosphere. In effect, we have added double glazing to the greenhouse.

It is this enhanced greenhouse effect that is causing the Earth to warm gradually. As long as the amount of energy entering and leaving the climate system stays the same, the Earth's average temperature will remain relatively constant. However, by enhancing the natural greenhouse effect we are reducing the rate at which energy can leave the climate system and thus the global temperature will increase until the system reaches a new equilibrium.

The increasing global temperature trend is sometimes referred to as 'global warming'. However, the increasing amounts of greenhouse gases will have an impact on the Earth's climate that far exceeds just a change in temperature. We have learned that a change in one part of the climate system can lead to a series of reactions that can disrupt normal weather patterns around the world. The term 'global climate change' more clearly describes the situation the world is facing. (http://ec.gc.ca/sc-cs/default.asp?lang=En&n=863DE3DE-1)