In the distant past over millions of years, countless number of tiny marine creatures died, their bodies accumulating in layers of sediment. Over time, pressure and heat transformed this sediment into a complex mix of hydrocarbons and other compounds better known as crude oil or petroleum—petra, the Latin for rock, and oleum for oil. 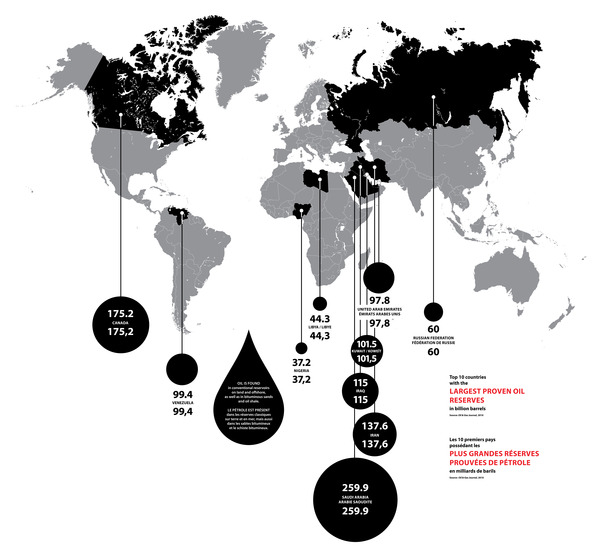 After Saudia Arabia and Venezuela, Canada has the third largest reserves of crude oil in the world, and almost all the proven reserves are in Alberta’s oil sands.

“Conventional” oil is already in liquid form and either naturally flows to the surface or can be extracted without being heated or diluted first. The first Canadian wells were drilled by pounding a pole back and forth into the ground. Today, a power drill spins through rock much more efficiently.

Some oil reservoirs seep to the surface, and some are more than six kilometres below sea level. They can be a few metres thick, or few hundred metres deep. Getting to the oil—“pulling dragons from the ground” as oilfield workers say—depends on many different factors: cost, oil type, location, and the available technologies. 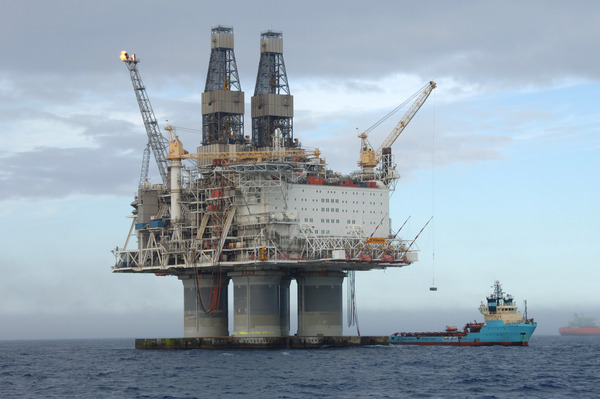 Offshore oil is harvested from deposits deep under water. Offshore drilling has a relatively short history, fewer than a hundred years. A British Columbian offshore moratorium means that Canada’s rigs are mainly located off our east coast. The Hibernia project off the shores of Newfoundland is the largest oil platform in the world.

Some oil deposits are not contained in rock formations, but have seeped into sand and dirt. Oil sand has three layers: a grain of sand, a coat of water, and a film of bitumen (heavy oil) surrounding the water. Over time, bacteria have eaten components of the light crude oil attached to grains of sand and left behind heavy and difficult-to-extract bitumen. Alberta’s oil sands cover an area of 140,200 square kilometres—the largest reserves in the world. 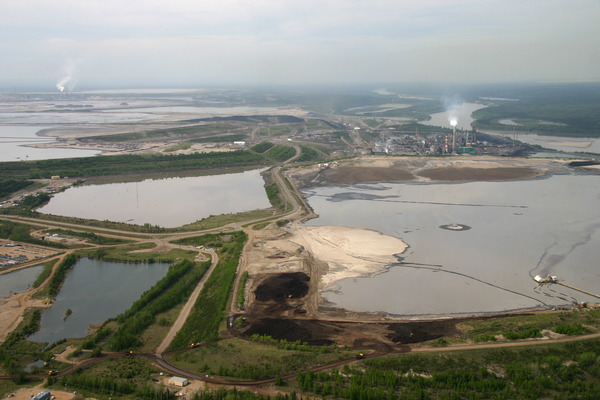 Heating oil-saturated sands is crucial to extraction at sites where the oil-bearing sands are deep underground. Canadian engineers have become world leaders in developing new methods to get the oil out of the ground. Steam Assisted Gravity Drainage uses horizontally-injected steam to reduce oil viscosity. The steam heats the oil, making it flow more easily, and the heavy oil is subsequently pumped out of the reservoir.

As Canada’s conventional petroleum resources dwindle, the industry is turning to secondary and tertiary extraction methods, both in traditional wells and in the oil sands. While these methods allow us to extend our oil reserves, they require advanced technologies and are expensive.

If it’s a vehicle, it probably runs on petroleum. Transportation consumes almost half of all of extracted petroleum. The rest is used to manufacture thousands of products: plastics, paints, rubber, fertilizers, pesticides, detergents, dyes, textiles and solvents.