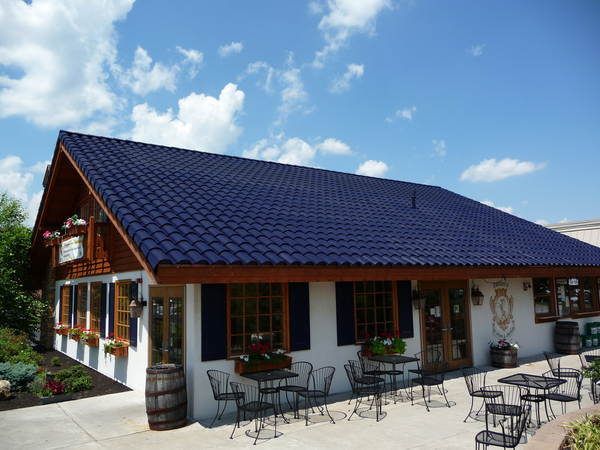 Radiation released by burning hydrogen in the Sun’s core powers all life on our planet.

Most of the world’s energy comes from the Sun. The Sun’s energy causes air currents, creating winds. It evaporates water from lakes, oceans and rivers, powering the water cycle. It gives life to plants and animals, which become biomass. Even fossil fuels such as coal and oil were once living organisms - which flourished by the Sun’s light.

Canada has abundant solar energy resources, with the largest resources being found in southern Ontario, Quebec and the Prairies. The amount of solar energy available across the country varies with the season, latitude, weather conditions and the time of day. As of 2013, Ontario was the only province with commercial solar farms feeding power into the grid - 14 of these large plants have a combined capacity of 338 megawatts.

Solar energy use is continuing to grow in Canada. In remote regions where powerlines can be hundreds of kilometres away - cost-effective solar energy technologies are being used to power over 50,000 remote homes and cottages, along with telecommunications equipment, oil and pipeline monitoring stations, and navigational devices. And in urban centers, buildings and homes are beginning to incorporate solar energy technologies into their design and construction. 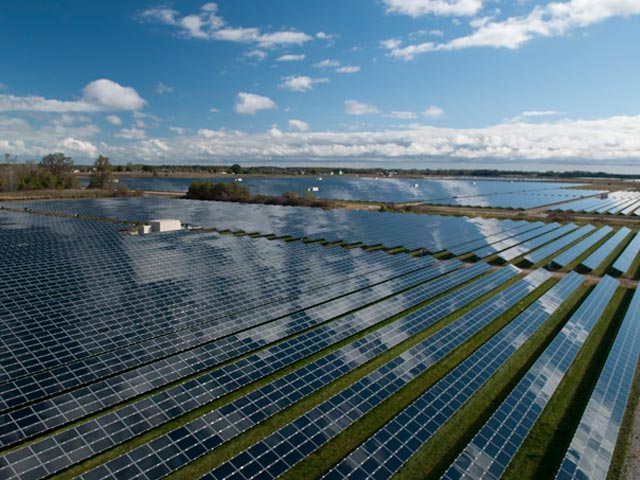 The Sun releases light in the form of photons.  A photon contains energy. When it strikes a photovoltaic cell, an electron absorbs the photon’s energy.  This energy frees the electron from the bond within the cell, and it enters the electric circuit of the solar panel. An inverter converts the energy into alternating current for our appliances and the power grid. A battery stores the energy for later use.

Passive solar energy systems use the Sun to heat living spaces without using any hardware. It only increases building costs by 1-5%.

Active technologies use mechanical or electrical equipment to convert solar radiation into heat (solar thermal energy) or electricity (photovoltaics). Active solar could meet about 5% of Canada's energy demands by 2025.

Solar photovoltaic (PV) cells convert sunlight to electricity. Though newer than thermal, Solar PV is a mature technology. As prices drop, adoption of the technology will become more widespread. For example, in 1998, the installed cost of a full solar system cost $11 per watt, and by 2010 the cost is closer to $6.

Solar technologies are frequently used for space heating and drying crops and lumber, the most common use for solar energy remains water heating systems - with more than 12,000 residential solar water heating systems in homes and 300 commercial and industrial solar hot water systems in use in Canada in 2001. In 2007, there were 544,000 m2 of solar collectors in Canada. 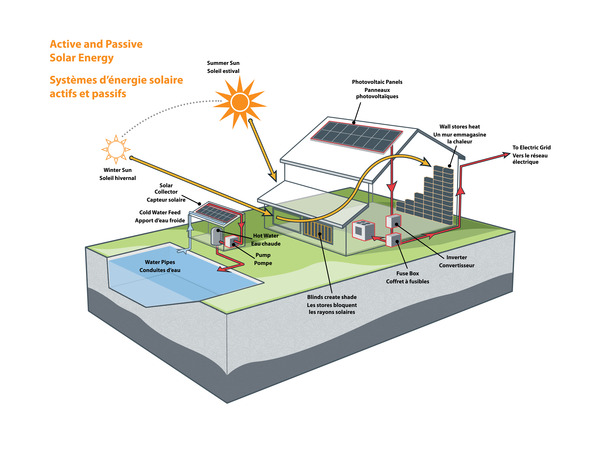 We use solar energy mainly for heating water and living spaces, but the market for solar panels that convert sunlight to electricity is growing.  Canada may not get as much direct sunlight as other places on the globe, but there is still potential for development.