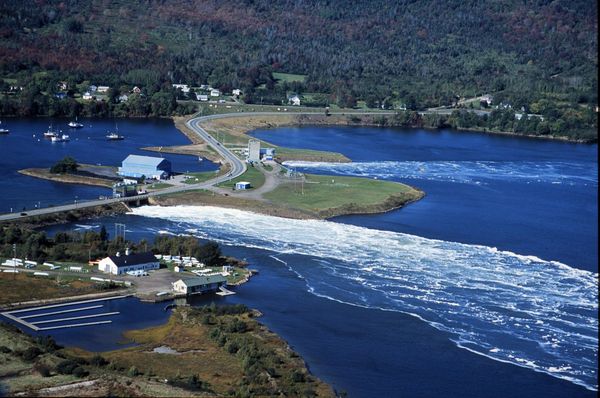 Hydro power is usually generated through the release of water from human-built reservoirs.  But the Moon’s gravitational pull controls the biggest movement of water on Earth—the tides.  Twenty-four hours a day, 365 days a year, oceans churn against Canada’s coastlines powered by surface waves and tides.

Tidal and wave energy are produced by a combination of natural forces that cause ocean waters to move.  For example, the gravitational forces of the moon and the sun produce tides - the gradual rise and fall of ocean levels – twice a day around the world.  Winds contribute to wave energy by blowing across the ocean surface producing waves.  Finally, atmospheric winds and the natural rotation of the Earth create ocean currents.  Electricity is generated by capturing the power contained in these moving waters, and the global potential from tidal is substantial: an estimated 1,800 terawatt hours could be harnessed worldwide. 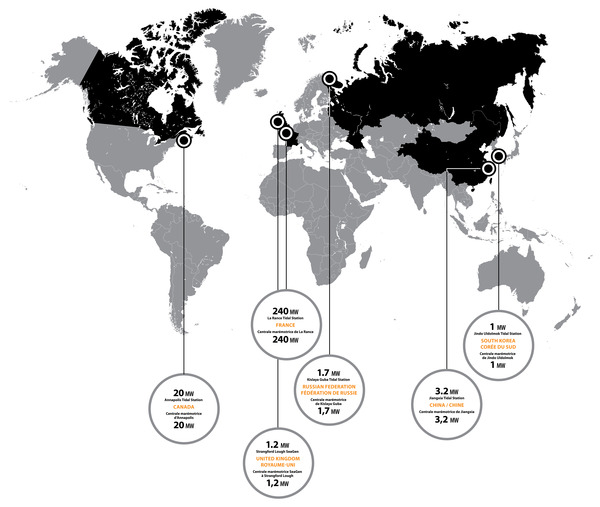 The total wave energy potential at depths of 1 km off Canada’s Atlantic and Pacific coasts is more than double Canada’s current electricity demand.  The potential tidal power at 190 sites on the Atlantic, Pacific and Arctic coasts collectively exceeds an annual average of 42,000 MW, or roughly two-thirds of Canada’s current electricity demand. Canada is also among the few countries with expertise in ocean energy.

The most common way to commercially harness tidal power is with a “barrage.”  A dam is built across an inlet and the change between low and high tide causes water to flow through tunnels in the dam.  The flow of water turns a turbine, which powers a generator, transforming mechanical energy into electricity.

Successful tidal power sites depend on a large “tidal range”—the difference between the low and high tides.  The shape of the shoreline must allow for the construction of a barrier.  The features that make a site ideal for a power station often make it ideal for marine life.  It is unknown how the environment will adapt to tidal developments.

New developments are on the horizon such as tidal lagoons, tidal in-stream systems, ocean thermal energy converters, and wave energy technology.  Canada is one of the few countries to have begun to harness tidal energy; the country's only tidal station is located in Nova Scotia, in the Bay of Fundy. Our oceans are a vast source of energy that can be harnessed to produce different forms of usable energy including tidal and wave energy.

This page contains content provided by: Ingenium, Energy BC