From movies to exhibits, this is the place to find all of Let's Talk Energy's previous activities and initiatives!

From February 18 to 25, 2017, Canadians across the country took part in the 4th annual Talk Energy Week. Talk Energy Week is a national energy awareness week, created as part of the Canada Science and Technology Museums Corporation’s Let’s Talk Energy initiative. Talk Energy Week encompasses events, demonstrations, a Speaker Series and a live streamed panel, as well as dialogue through web and social media, all aimed at getting Canadians talking and learning about how energy is connected to our lives, and the importance of energy systems to our economic, social, and environmental future. 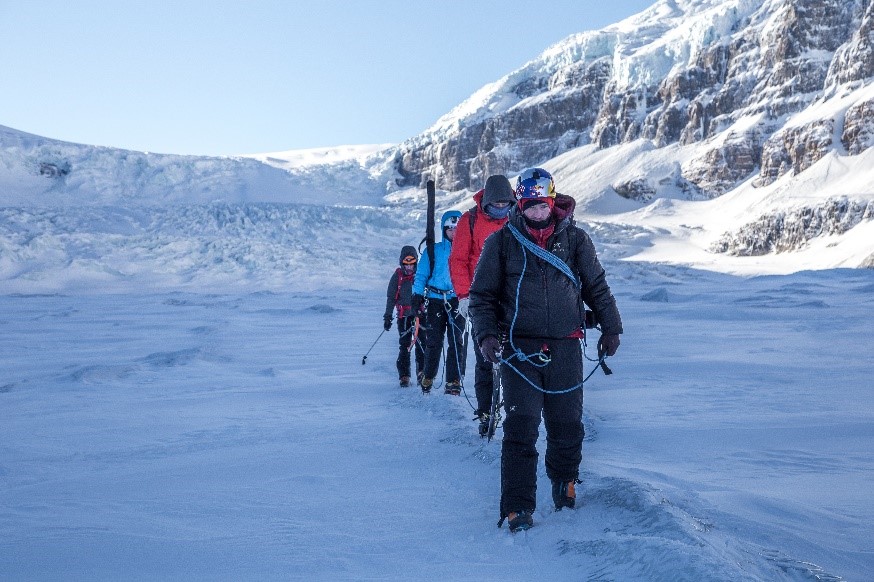 From December 14 to 16, 2016, Jason Armstrong, Manager of Let’s Talk Energy, and Jonathan Boutin, Talk Energy Week coordinator, accompanied by internationally renowned ice climber and Red Bull athlete Will Gadd, descended into Alberta’s Athabasca Glacier to explore the effects of climate change on the glacier. The team was joined by Martin Sharp, a glaciologist from the University of Alberta who helped explain the impacts that climate change has had, and will have, on the area in general and the ice fields in particular. 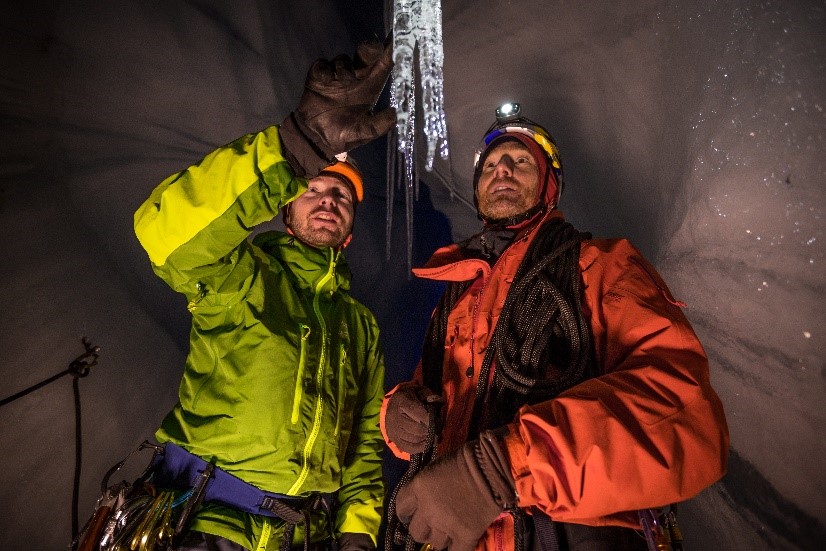 The objective for the three day expedition was to create a video series exploring the impacts of climate change thought the lens of extreme sport. 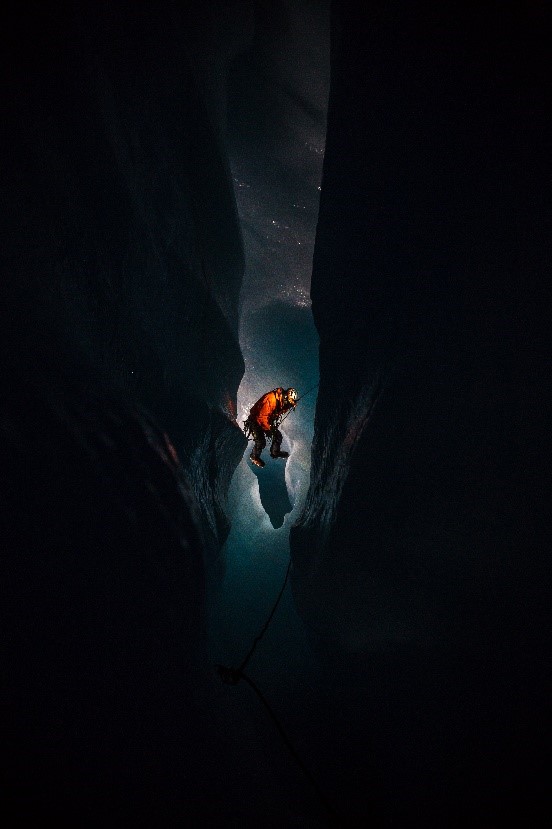 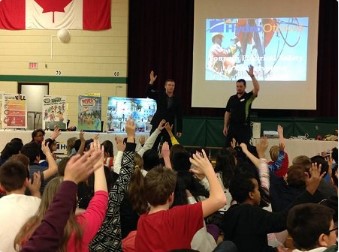 This year’s Talk Energy Week Speakers Series and in-class programming reached more than fifteen communities across the country, and featured a range of climate science, energy, local energy policy experts, as well as hands on activities from Actua and Ottawa Hydro. This year, the focus was on providing in depth and interactive presentations so that students were fully engaged. Many of the speakers led hands on activities and interactive presentations relating to the energy systems in the students’ communities. 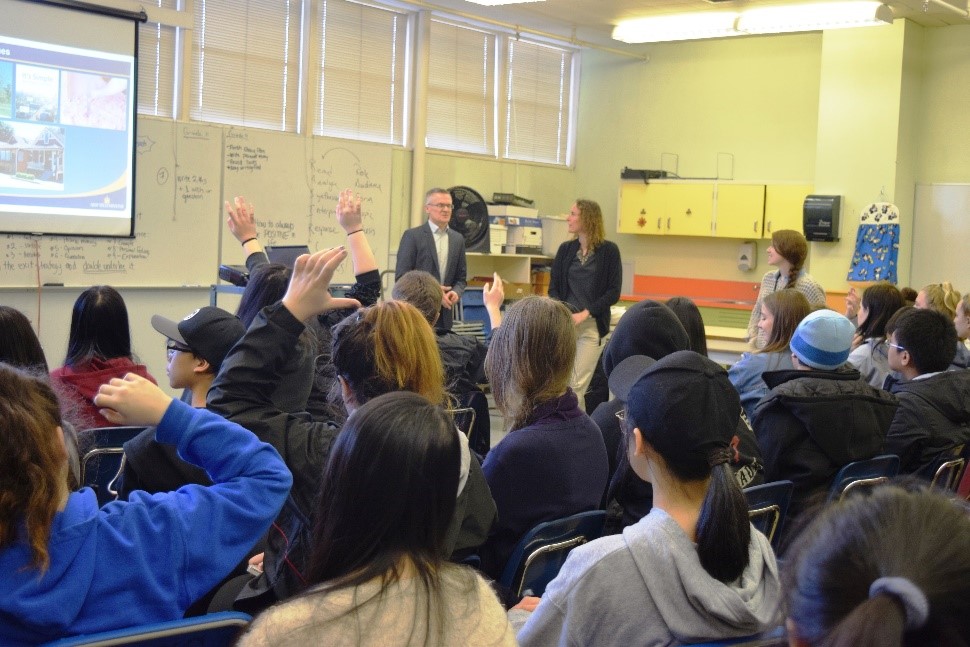 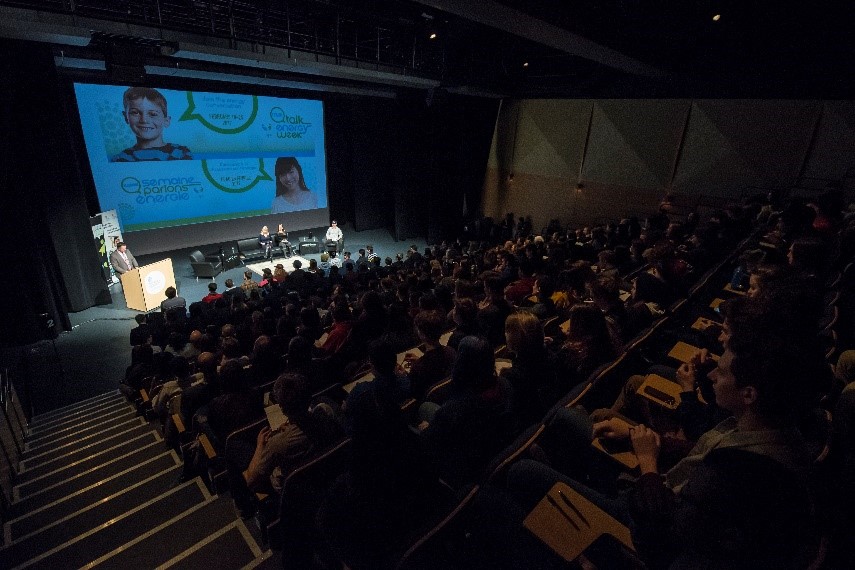 On Tuesday, February 21, the Talk Energy Week team hosted a panel discussion on energy and climate change in Canada which was streamed through Facebook Live and viewed in classroom across the country. The panel featured the Honourable Catherine McKenna, Minister of Environment and Climate Change and Member of Parliament for Ottawa-Centre, Will Gadd, Canadian Ice Climber, Red Bull athlete, and leader of our recent expedition to the Athabasca glacier, and Andrea Brazeau, Indigenous youth leader born and raised in Kangiqsualujjuaq, Quebec who is now pursuing post-secondary education in Montreal. 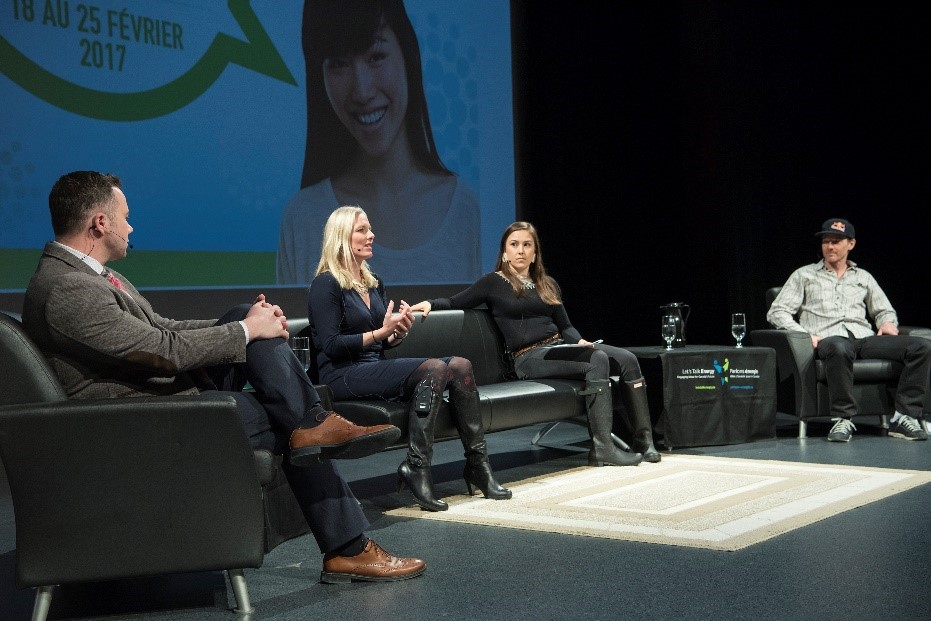 Trek Board Demonstrations in Museums across Canada 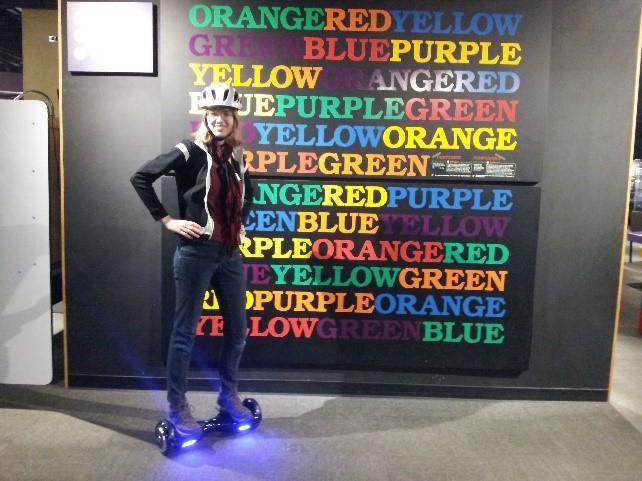 Since the first Talk Energy Week in 2014, hands-on demonstrations have been a key part of the initiative. These demonstrations are designed to engage members of the public in increasing their energy literacy and participating in dialogue about Canada’s energy mix and our energy future.

A total of 9 locations across Canada received Trek Boards for use in educational demonstrations.

In partnership with Canadian Geographic, the Let’s Talk Energy Team has compiled a list of lesson plans and resources around energy and climate change to send to schools. Teachers are able to sign up to receive these lesson plans so that they can then lead their classes in these activities. 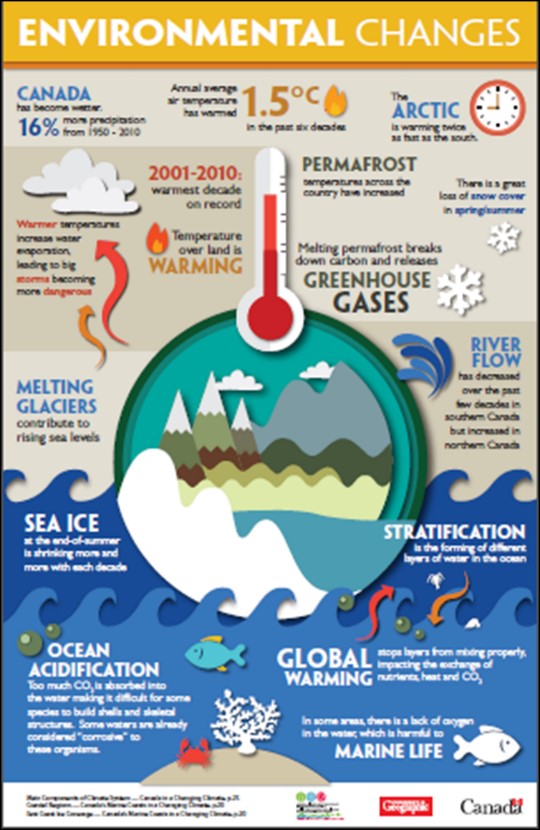 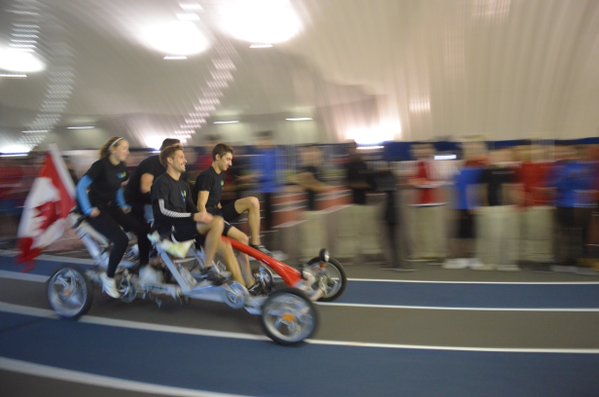 The conversation on energy kept going with students of Louis Riel School during their attempts to set a record for fastest ten kilometres on a quadricycle. The goal was to highlight the second largest use of energy for Canadians: transportation. While not everyone has a quadricycle they can take to work, Let’s Talk Energy hoped to encourage Canadians to think about the way that they use their energy, and to think about changing their habits in the months leading up to Talk Energy Week 2016. 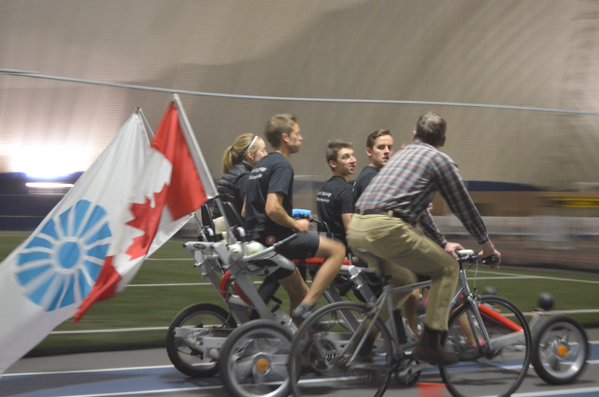 The week itself was made up of three main components: a broadened speaker series, a live broadcast webinar, and thermal camera activities run at museum affiliated partner sites. Thermal cameras are always a big hit at outreach, and thanks to FLIR Canada many were on the road for Talk Energy Week 2016, at some of Let’s Talk Energy’s 31 museum affiliated partners! These cameras were used to show the importance of heating and cooling in a cold country like Canada and to give people the chance to check out how a thermal camera shows energy. Many visitors also took the opportunity to snap a #selfheat! 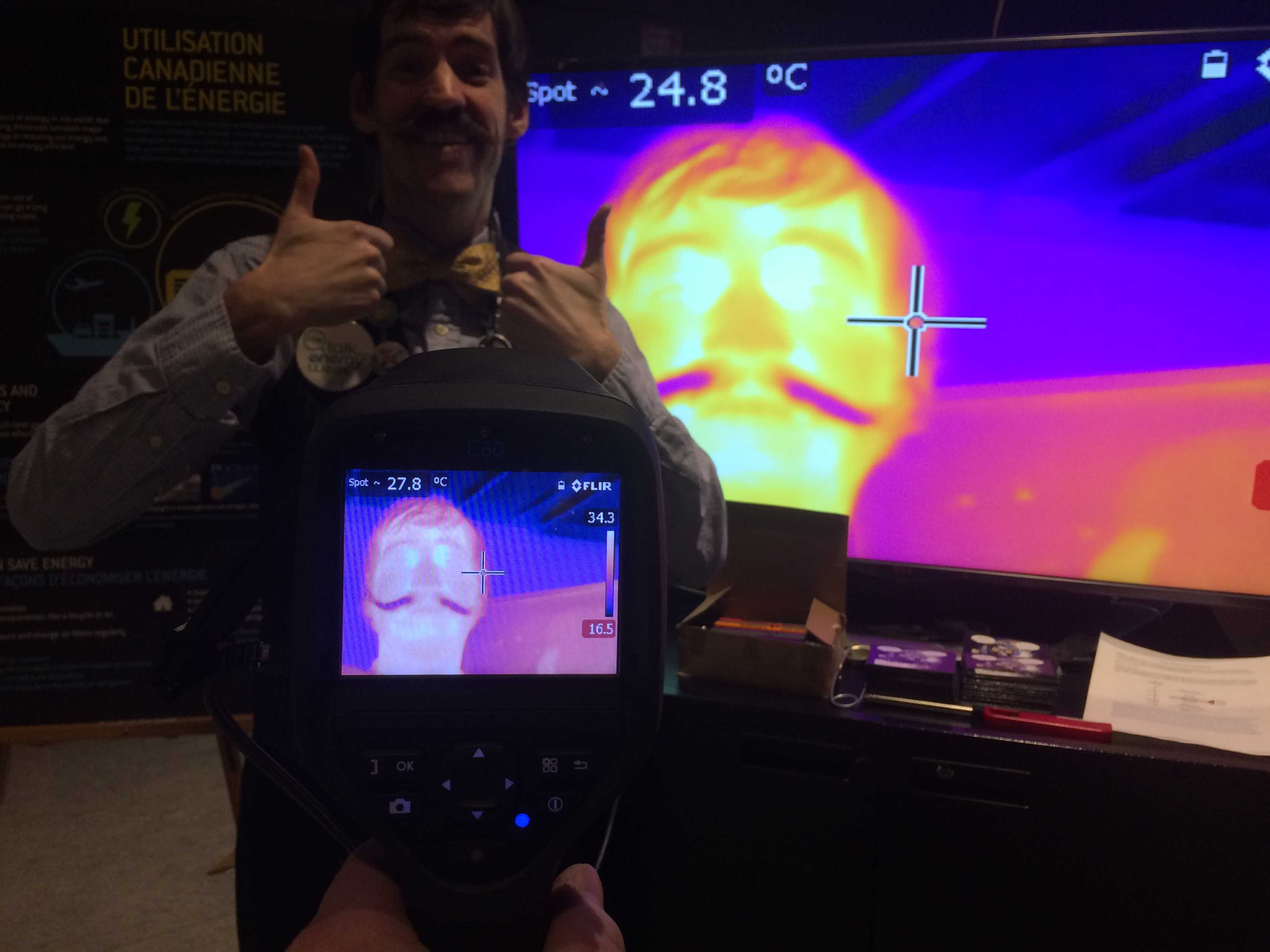 The speaker series this year grew exponentially and thanks to enthusiastic schools across the country Talk Energy Week 2016 was in every province and territory. Experts from over 40 organizations talked to students in their schools about how they think Canada can move towards a prosperous and sustainable energy future. From Nunavut to Newfoundland, students were engaged in talking about energy!

The final component of this year’s Talk Energy Week took place in Ottawa at the Canada Aviation and Space Museum. Over 100 students from local high schools joined three University of Ottawa students and recent grads to discuss the various perspectives on energy. They were joined by students across the country, who participated by sending in their questions via social media. To see a recording of the webinar, please visit our YouTube channel. 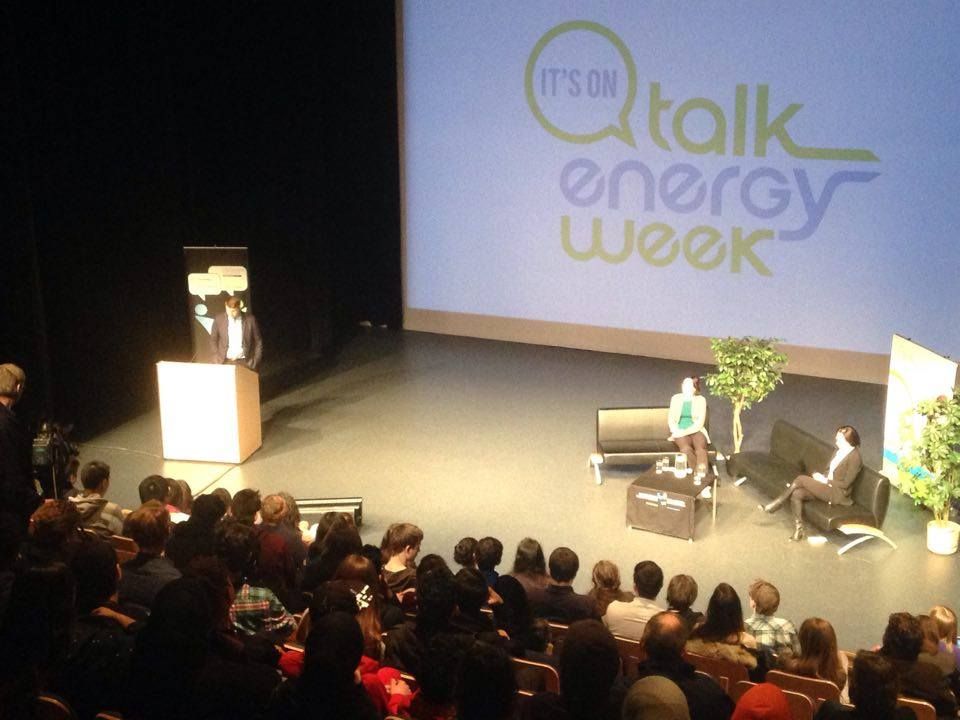 Planning is now beginning for Talk Energy Week 2017! If you have any suggestions, or if you’d like to get involved in the planning of next year’s event, please contact Jonathan Boutin at jtboutin@techno-science.ca.

Talk Energy Week 2015 was a huge success! Between events in malls and our five speaker series, we had communities participating in nine provinces and one territory.

The week started out with a launch attended by Olympian Seyi Smith, Paralympian Jaye Milley, and 100 Calgary high school students. At the launch we featured our new energy bikes, which posed a challenge even for our Olympian guest. 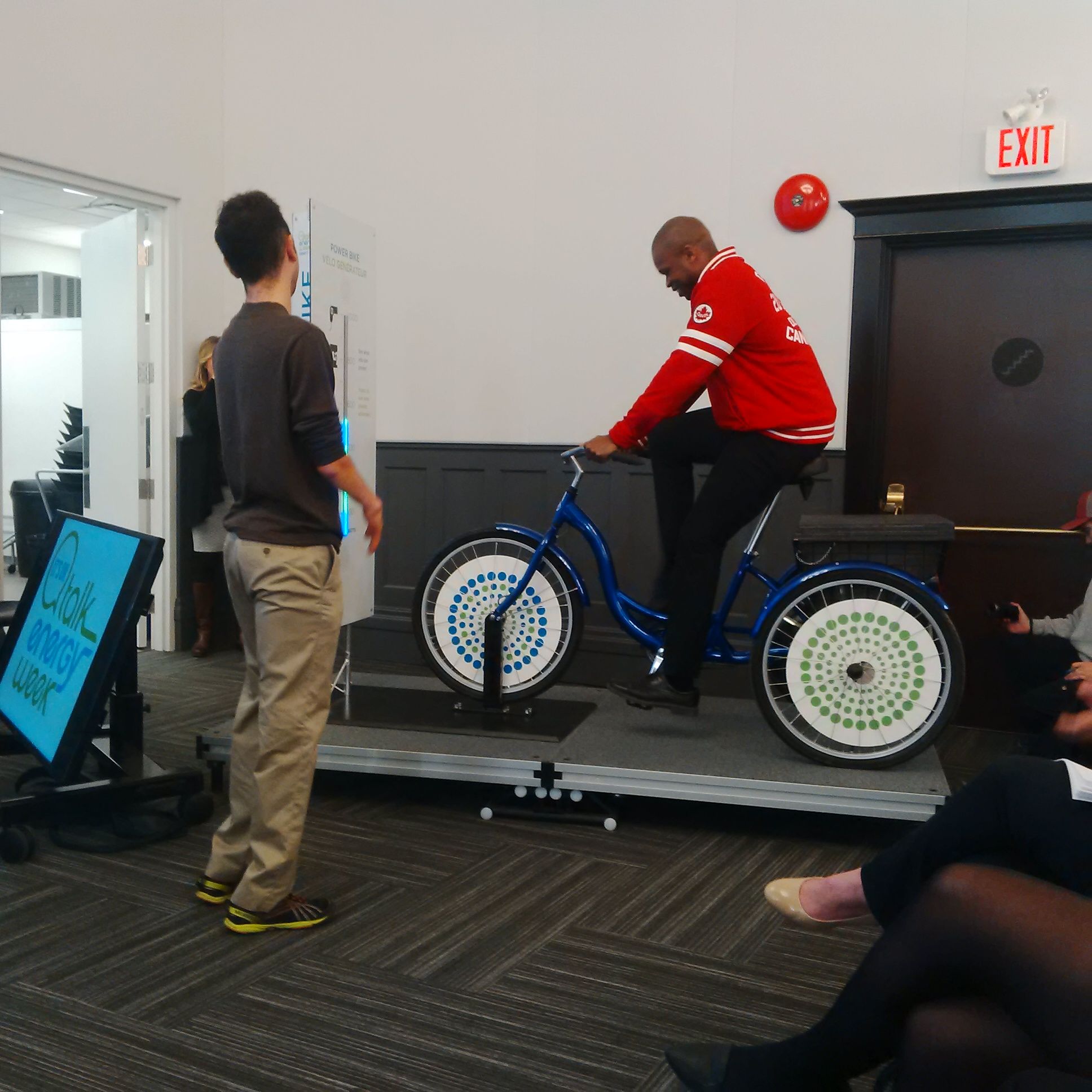 The bikes were also featured in four major malls across Canada – the Eaton Centre in Toronto, the Rideau Centre in Ottawa, Winnipeg’s Polo Park, and the Chinook Centre in Calgary. Thousands of visitors to the mall were eager to try the bikes out. 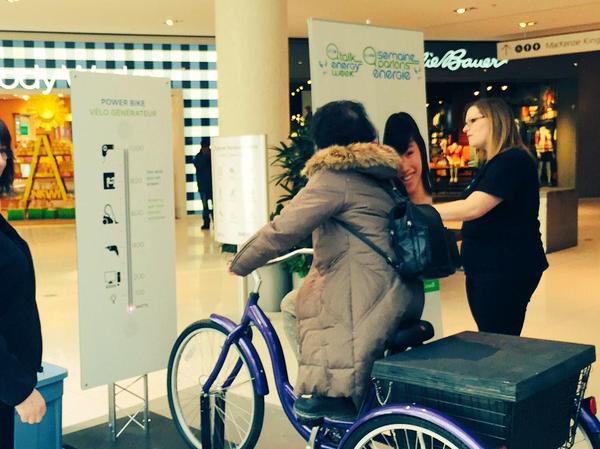 Our speaker series featured 18 different speakers and were held in Fredericton, Ottawa, Winnipeg, Calgary, and Vancouver. We were really happy to have 450 students come and talk with our speakers about what they think about energy in Canada. 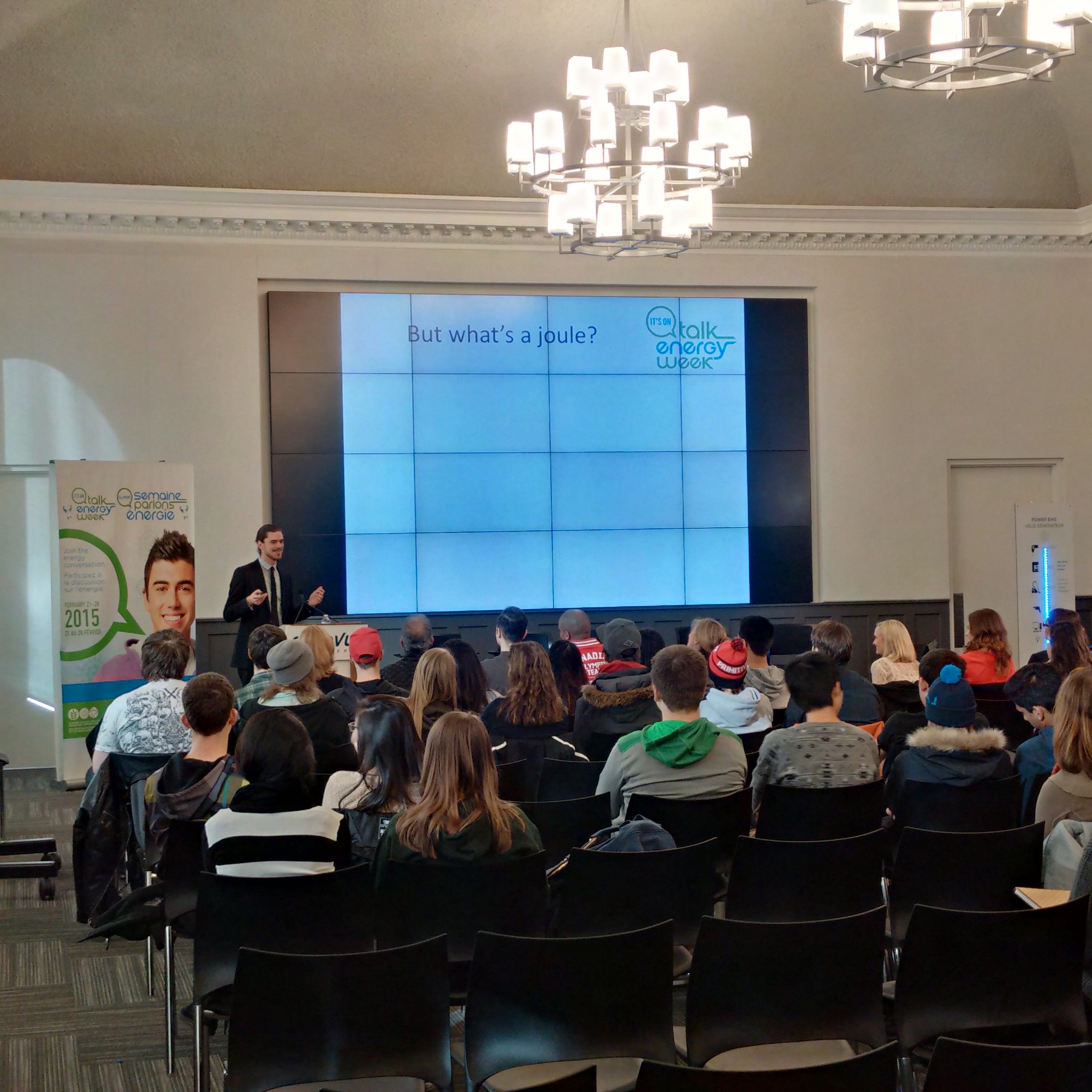 Talk Energy Week 2015 was also part of a giant social media campaign. As such, and to draw awareness to energy in our lives, Jonathan walked from Montreal to Ottawa, chronicling his adventures during his five day trek and posting it to social media. He also visited several interesting sites on the way, of which the video and photos have made their way to our Facebook, Twitter, and YouTube.

Switch is a feature-length documentary that follows Dr. Scott Tinker as he uncovers the economics and politics of energy today. Dr. Tinker embarks on a global expedition to get to the core of the issue, visiting important energy sites and talking with influential people from every sector of the energy industry. Switch takes on a controversial topic with a balanced approach that illuminates the path towards our energy future.

Let's Talk Energy, in partnership with many museums, science centres, universities, colleges, and community groups, will be screening Switch to audiences across Canada. Many screenings  include a discussion after the film, so you can talk energy with your friends and family and learn even more about this complex issue. If you're interested in organizing a screening in your community, let us know and we can help! 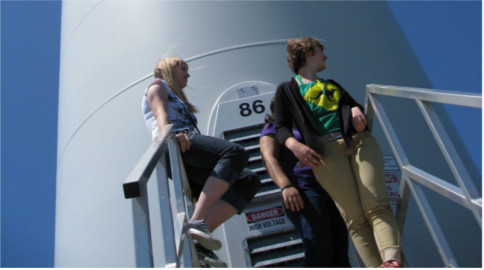 LET'S TALK ENERGY facilitated the participation of students from Brookfield High School in Ottawa in SCEnaRios, an initiative sponsored by the Association of Science-Technology Centers (ASTC). Students spent ten months learning about the past, present, and future of energy production and use, and engaged with students in Denmark and the United States to discuss the future of sustainable energy. Students from the three countries shared their experiences through a series of online discussions. The Ottawa students produced collaborative video projects, one on their overall experience, one showcasing a trip to a wind farm, and one about their experience at a hydro power generating station. Watch some videos here: www.youtube.com/playlist?list=PL6A0904A38EBD5E18

The students also joined a video conference during the Rio+20 United Nations Conference on Sustainable Development, in which they discussed various aspects of sustainable development with peers from 12 countries. 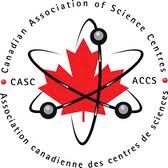 This year, LET'S TALK ENERGY entered into a partnership with Canadian Association of Science Centres to introduce an annual CASCADE award recognizing the Best Energy Literacy Project to be presented by the association each year at its annual conference. The first such award was presented on May 5, 2012, to Science World British Columbia for its initiative "B.C. Green Games". This province-wide program was created to increase students' awareness of environmental issues and their ability to become local leaders and improve sustainable practices in everyday life. Energy conservation and efficiency are central themes of this annual contest. Its reach across the province has been significant: while 60% of provincial population resides in metropolitan Vancouver, in 2011 only 45% of participant projects were from this urban area. Since the program's inception in 2009, 350 projects have been uploaded to an on-line repository for ongoing reference. Congratulations Science World British Columbia! www.bcgreengames.ca

More information on all projects nominated for this award is available at
http://www.canadiansciencecentres.ca/?n=7-123&lang=1

The Corporation has partnered with Natural Resources Canada, Environment Canada, University of Alberta, the Canadian Space Agency and the National Research Council to produce an energy display for the AAAS Annual Meeting. The display showcased new Canadian technologies developed to improve the environmental footprint of energy related industries.
Features included environmental monitoring, descriptions of ocean technologies such as Clean Current turbines and the research undertaken by FORCE (Fundy Ocean Research Center for Energy), information on a solar tracker system, and a Zero Energy House. AAAS met in Vancouver February 16-20 2012. This is the first time since 1932 that this organization is meeting outside of the United States.